Obviously, I haven’t been blogging much. Mostly because I stay so busy but also because I just haven’t had much to say. Those who know me best are probably snickering at that last line, but it’s true.

For those who are curious, a few years ago, I started a tree service/landscaping business. Given my circumstances, it was the best option for me. I love the outdoors and have always enjoyed that kind of work. Today, I have a growing LLC and serve most of East Tennessee. It’s not as “glamorous” as writing or as “prestigious” as teaching, but to paraphrase Booker T. Washington, there’s as much dignity in plowing a field as in writing a poem. Besides, I’m happier today than ever before.

I’ve been considering rekindling this blog with glimpses into the jobs I do. If I can build back a little following and have decent interaction, I might do it.

Overall, life is good. My body is sore but my soul is unencumbered. It seems like each week I add a new piece of equipment or a new client, and no two days are ever the same. I wish I could impart to other creative people that using your skills for utilitarian purposes is so much more rewarding, both financially and emotionally, than creating self-indulgent crap. Ah, but that’s a different post for a different day.

Until next time, Dwarven Nation.

Two and a half years ago, I was a shell of a man, struggling to get to my feet and find my bearings after my divorce.  I was broke and broken. I lived in my best friend’s spare bedroom and didn’t have my own car.  I made it to and from work by bumming rides from family and friends.  Each day was a challenge to find the motivation to get out of bed and force myself to trudge onward.  Because of the terms of my divorce, I get to keep roughly $.51 on every $1.00 I earn.  After taxes, child support, and insurance for my kids, my take home pay is barely above minimum wage.  Those factors severely limit how often I get to see my children, and for anyone who knows me, you know how deeply that affects me.

Two and a half years ago, I faced tough choices.  I could lay down and give up, and quite frankly, that option was pretty appealing.  I could move somewhere else, closer to my kids, and start a new life.  I went so far as to apply for jobs in South Georgia and North Florida.  Then, one day, as I worked on cleaning up my motor home to get it livable, an idea came to me.  I looked out at my family’s 27 acres and realized that one of the passions I’ve always wanted to pursue is growing vegetables.

So I went back to the drawing board and designed an ebb and flow hydroponic unit.  In August of this year, I finally had enough money to buy all of the components necessary to build and launch the system.  Today, I’m a couple of weeks away from the first harvest.  From this experience, I’ve learned some valuable lessons, most notably that because of the grow rates of various plants, it’s important to have multiple systems to maintain proper nutrient cycles for each.  To that end, I want to build our second unit that I can dedicate to one specific vegetable.

But like I said, I’m severely limited in my financial resources, so quite honestly, I need help.  I’m currently running an IndieGoGo campaign to raise funds for this second unit.  If I didn’t need this money to get the unit up and running soon, I wouldn’t be asking, but I know, based on my take home income, it will be mid-summer before I can have enough money to put into it.  If I can get this system going now, I could effectively have three harvests in that time frame.

Recently, I’ve watched three specific fundraisers have tremendous success.  A friend of mine raised money for a rock video.  Within 48 hours, he had surpassed his goal.  An acquaintance raised money for an independent film and received enough to cover production costs.  Most recently, my publisher ran a campaign for a new book project and raised nearly 250% of their goal.  I don’t resent the successes of these fund raisers.  In fact, I supported each one, sharing links and writing blogs about them, but I am bothered by the lack of interest in supporting my project.

I’m trying to build a farm that will have a long-lasting impact on the lives of people in this region.  We need more fresh, organic vegetables in this area.  We need more sustainable agricultural practices.  That’s not political either.  It’s just a fact.  Weather patterns are changing.  During the grow season, we have extended periods of drought followed by intense storms.  That’s not conducive to efficient farming.  The future will have to be focused on developing indoor growing environments that are year round and efficient.  I’m not even going to get into the effects of rising fuel prices on traditional farming, but our current model isn’t financially sustainable long-term.

So I’m asking for your help.  If you can, please, contribute, even $1.  If you can’t, please share the link, especially with people you know who might be interested.  This farm has the opportunity to change lives, not just mine but those in my community, too.  I believe that with all my heart.  I have the plan, the design, and the ability to make it happen.  What I don’t have are the financial resources.  Please, help me make this a reality. 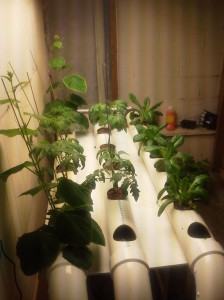