There’s a lesson to be learned from Randy Moss and Albert Haynesworth.  They are great examples of how talent can only carry a person so far.  Both had the raw physical ability to be, if not the very best, one of the best ever to play at their respective positions.  However, both men have lazy streaks that kept them from achieving their full potential.  Because of his numbers, Moss will probably still make the Hall of Fame, but he could’ve been remembered as one of the greats, instead of a guy who played when he wanted to.  Haynesworth, on the other hand, squandered Hall of Fame talent and will hardly be remembered as anything but an overpaid thug.

At the opposite end of the spectrum, there was Jerry Rice.  For the last two or three seasons of his career, Rice was the third or fourth option for his offense, and most players who commanded his salary would’ve been cut.  However, Rice was kept on the team not so much for his productivity but more for his leadership to the younger players.  His work ethic and practice habits provided an example for them to mimic.  He was the greatest wide receiver and one of the three or four greatest football players ever to play the game, and he showed up to work every single day as if his job were on the line.  Not only that, he played every single play as if it were the last play of the Super Bowl. 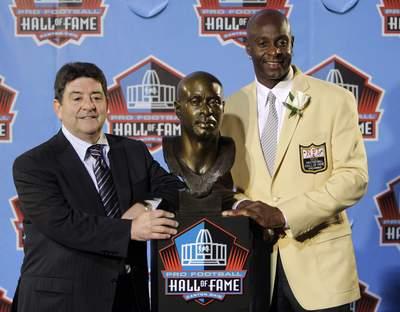 Neither Moss nor Haynesworth can claim that they have worked as hard as they could in their careers.  Throughout his playing days, Moss has consistently taken off plays when he knew the ball wasn’t coming his way.  He rarely blocked on running plays, and often jogged routes when he was the decoy.  He’s always been selfish and greedy, and now, at the end of his career, he’s been traded and cut and released from team to team to team because he’s a cancer in the locker room and the opposite of a team leader.  Physically, he was as gifted as Rice, but mentally, he lacked the drive, motivation, and discipline to live up to those standards.

Likewise, Haynesworth has always showed up at the beginning of camp fat and out of shape.  Even in college, he rarely practiced hard, and he’s always relied solely on his physical skills to carry him.  Granted, those physical skills were once tremendous, and had he had the work ethic of a Joe Greene or a Randy White, he would’ve dominated the league for a decade.  Instead, he had a couple of great seasons, always in contract years, and then a few above average seasons and a few forgettable ones.  At the end of his career, his head coach Mike Shanahan finally held him accountable for his behavior, benching him until he got his weight down, sitting him again when his attitude stank, and finally suspending him for the final four games.  Hardly the end of a career for a guy with Hall of Fame talent, but definitely the end for one with a welfare mentality.

Both Moss and Haynesworth are wealthier than I’ll ever be.  Their worst NFL contracts are probably more than I’ll make in my entire life, so in monetary terms, they were both successful men.  Unfortunately, that seems to be the only standard that matters these days, but that’s another issue altogether.  I still believe in the archaic notion that a person should be measured by the quality of their work, not just how much money they make.  In those terms, both Moss and Haynesworth failed to make the most of the natural skills they were blessed with, and while they did achieve some success on the field, both men failed to elevate their teams to championship levels.  That’s because champions are motivated by the desire to be the best in the world, and they work and work and work until they make that happen.  That’s the lesson of these two men.  Soon, they will be out of football for good and forgotten by most, and the league will be better off without them and their rotten attitudes.