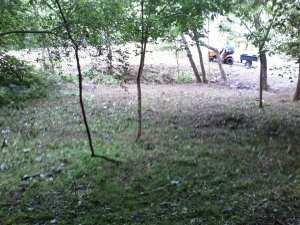 Sunday and Monday were fairly rough days, as I was dealing first with a bad poison oak rash and then the side effects of a steroid shot to clear it up.  Despite disabling me on Monday, the steroids did the trick, and I was back at it with a vengeance yesterday, making a huge dent on the area near the springhouse where we’re going to raise mushrooms and hopefully build a wood burning smoker inside an old brick building.  Things are really taking shape in that area and starting to look usable again.  It’s a good feeling to once again see real progress on the farm front.

Also, book four is coming along nicely.  I’ve been writing fairly steadily each night, again with the exceptions of Sunday and Monday, so hopefully I will stay on track with my deadline for completing the rough draft.  I feel like the story is moving in right direction, and the tensions in the story are growing nicely.  My goal is to make this the best book of the series so far, and while it will take some polishing to get it there, right now, it feels on track.  I’ll know more after getting a couple of first readers to glance over the first couple of chapters to make sure it starts with a bang.

That’s all for now.  Time to get outside and work on clearing more poison oak and honeysuckle.  Have I ever mentioned just how much I hate them?  Well, just as a reminder, they’re both of the devil and will be eradicated from my little corner of this earth to make room for plants that aren’t parasites.  Here’s to another day in the sun.

One thought on “Wednesday Afternoon Ramblings”