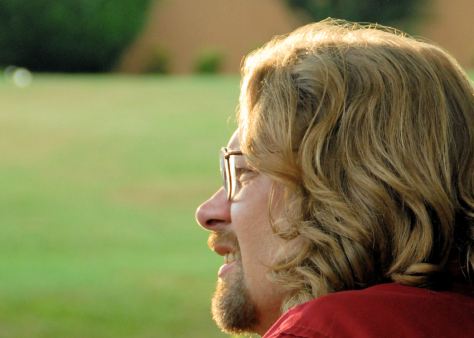 A dull thud tapped me on the forehead, like someone had taken their palm and bumped me playfully.  The next thing I knew, I was sitting on the ground with two shotputs in my lap, which strange because I’d only been carrying one.  I rolled them away and tried to get my bearings, but everything was a swirl of colors and sounds.  Then, I felt a tickle on my eyebrow, like sweat was dripping, so I reached up to wipe it away and pulled back a hand coated in blood.  That’s when I knew something bizarre had happened.

On this day in 1989 at roughly 3:30 in the afternoon, I nearly lost my life.  An 8 lb. shotput had struck me on the right side of the head just above the hairline. I suffered a nasty laceration, exposing my skull, a severe brain contusion, and at the time, when they still graded concussions, the highest grade concussion on the chart.  Fortunately, it had hit me on the hardest part of the skull and didn’t fracture or even crack the bone.  Also, because of the angle, it mostly glanced off my head instead of impacting with full force.  I spent three days in the hospital, lost 20 lbs. from the trauma, and literally nearly died.  To this day, I live with some symptoms of post-concussion syndrome.

For many years, I wallowed in self-pity for everything the accident took from me: mostly the opportunities to play college football and join the marines on an ROTC scholarship.  Then, one day I woke up and realized that I was fortunate simply to be alive.  Today, as I mark the 23rd anniversary of the day that changed my life, I want to focus more on what the accident has given me, namely an appreciation for my life and my creativity.  Without those, I wouldn’t be the man I am today, and I’m fairly happy with that man.

In terms of appreciation, I see each day as a blessing, as time I’ve been granted by grace.  Even with all the turmoil and difficulties of the last five years, being alive and on this earth allows me the opportunity to learn and grow and laugh and love.  I’ve gotten to experience fatherhood, and if it took enduring that accident a hundred times to have my sons, line me up.  In terms of creativity, I’m convinced that at least in part, the injury awakened some part of my brain that had mostly been dormant.  At the very least, it forced me to turn my attention away from athletics and towards writing, so I see now that the accident has given me far more than it took.

Not too long ago, I found Bobby, the boy who had mistakenly thrown it, and got to tell him, after years of needing to share this, that I had never harbored any ill-will for him, even during the worst of my headaches and the darkest of days.  We were unsupervised kids, and even if he had had been trying to hit me, there was no way he could have done so on purpose.  It was just a dumb, fluke accident.  I hope he knows in his heart that he wasn’t to blame, and I hope he doesn’t carry around any misplaced feelings of guilt.  Bobby, if you happen to read this, I love you, man.

So today, as I remember that day and the subsequent years of symptoms, I ask all of you to do one thing.  Contact those you love most and tell them how you feel.  Don’t wait.  Do it now because you never know what split-second, dumb fluke could end their or your life.  Embrace your darkest moments, for even those days are blessings.  None of us are promised anything on the other side; everything beyond this world is pure speculation, so cherish each day on this earth.  Any day above ground is a good day.