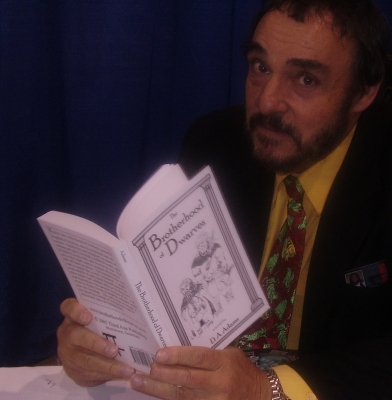 Today, I’ll start numbering and signing the limited edition copies of The Fall of Dorkhun.  It’s a tedious process, but one that I enjoy.  I’ve never had a hardcover version of my books before, and holding them feels a little surreal.  It’s similar to watching my kids grow.  In the beginning, they were these small, fragile things, completely dependent on me for life, but as they’ve grown, they’ve become something more.  It’s hard to put into words.

Recently, I’ve offered to send a couple of the remaining versions of the first edition of TBOD to two friends who’ve been very supportive of me over the last year, so I got out the copies and looked at them.  It’s a wonder I sold a single one.  They were so shoddily put together by the printer, and the art was so simplistic.  I’m sure one day that original cover will make someone’s “Worst Book Covers of All-Time” wall of shame, but even so, holding those versions is still like holding one of my sons.  I had so few resources to work with but wanted so badly for the book to see the light of day that even though the binding is bad (literally, pages just fall out, not one or two either.  Dozens at a time.), the art looks like a doodle (As one person told me.), and the layout is obviously amateurish (I had no idea how to design a book cover.), I still love them.  And there are probably fewer than a hundred of those versions still in existence because they were so fragile.

I realize I’m waxing nostalgic and am being a sentimental fool, but I’m proud of the first printing of the first edition.  I had the balls to step into the arena and compete, the fortitude to weather the criticism and ridicule, and the persistence to keep fighting and keep writing.  Not many can say that.  I took a lot of criticism and heard a lot of teasing, and while it hurt, it also strengthened my resolve.  Today, each of my books has a gorgeous new cover designed by Bonnie Wasson (the first two should be revealed soon), and I have an excellent support system with SSP.  All of the jokes and nasty comments have been worth it because I achieved the goal of that original first printing: to garner enough attention to attract a reputable publisher.

But it all started with an “ugly” book with shoddy binding, and I hope to never forget those roots.