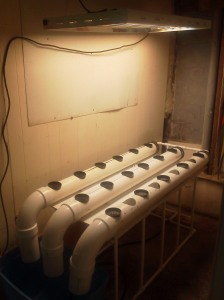 Here’s a farm update.  After two years of research, planning, testing, set-backs, building, and rebuilding, our first hydroponic system is up and running.  For the trial run, we’re growing three varieties of tomato, two kinds of lettuce, cucumbers, and cauliflower.  So far, the seedlings for spinach and peppers haven’t sprouted, though one of spinach plants looked promising this morning.  Right now, the young plants are growing well and all is working as it should.  Hopefully, in the next couple of months, we’ll have our first harvest of fresh, organic veggies, just as prices begin to skyrocket.

The thing I love about this system is the simplicity.  It’s an easily repeatable design and functions quite nicely.  We won’t know if it fully works until we get a harvest, but so far, the lights seem to produce ample spectrum; the grow chamber floods and drains the way it should; and the plants have shot up quite a bit in one week.  After watching them flourish so quickly, I’m more convinced than ever that indoor growing is the future of farming, especially as weather patterns become more and more erratic and more and more extreme.  The indoor environment is more stable, more efficient, and more controllable than outdoors.  Long-term, indoor production will be the solution to farming.

I’ll continue to post updates as the plants mature.

Not three months ago, I could barely climb a flight of stairs without feeling like I was going to fall.  My left hand was nearly unusable from the trembling and twitching, and by noon each day I felt so exhausted from having to concentrate on mundane tasks that I could barely get through the rest of the day.  Three months ago, I literally thought I was losing the ability to function and possibly even dying.  It was a terrifying experience.  Those who really know me know I’ve never been a hypochondriac, and many of my students and colleagues verbalized how haggard I looked.  Some expressed outright concern for my life.  Just three short months ago.

Nine months ago, I could work from early morning until late evening, doing hard physical labor, but then still have the energy to write.  Sometime around mid-July, I started noticing that my left hand was bothering me, and by mid-September, I had all of the symptoms listed above.  Nine months ago, I felt healthier than I had since I was a teenager, and within a couple of months could barely function.  It was a wild roller coaster ride, believe me.

Monday, I sat looking at the nearly full acre of land I had cleared over the previous four days.  Using both hands fairly well, I handled a chainsaw, loppers, and a walk-behind brush cutter.  I carried logs that easily weighed fifty pounds each across the acre to the burn pile without losing my balance.  In three short months, I went from barely able to climb stairs comfortably to able to traverse uneven ground with a heavy load.  If that’s not an amazing recovery, I don’t know what is.  While I don’t quite feel 100% normal, I would now put myself somewhere around 80-85%.  I can function relatively normally without having to concentrate so much on handwriting or typing.  My minds feels less sluggish.  My legs no longer feel welded to the ground.  And I feel like I’m living again, not dying.

The only major difference in my daily life over the last two to three years has been the consumption of gluten.  For many years, I had practically eliminated it from my diet.  Then, slowly, I started reintroducing it, thinking I was making healthy choices by eating whole wheat breads and multi-grain pastas, but probably the single biggest source of gluten for me was beginning to drink beer again.  I love to have a cold beer or two after a hard day.  I almost never drink until I’m drunk, but I do enjoy the flavor of a good beer.  For the first 30 years of my life, I consumed gluten with nearly every meal and became very unhealthy.  For 6-7 years, I all but eliminated it from my life and became very healthy and energetic.  Then, I added it back in and within a year became so sick I thought I was dying.  Now, a mere three months after eliminating it from my diet completely, I’m on my way back to health.  I don’t need much more proof than that.

My point of all of this is that if you are experiencing unexplained health problems and your doctors can’t seem to find an answer, please find a specialist who really understands gluten sensitivity.  I am walking, living proof of the perils it can pose to one’s health.  Living without gluten is not nearly as hard as you might think, and the positive benefits far outweigh the small sacrifices in comfort foods.  Even if your regular doctor scoffs at gluten or Celiac and tells you it couldn’t possibly be that, please find a specialist and get a second opinion.  It quite literally could be the difference between living an active, healthy full life or feeling your life drain away from you. 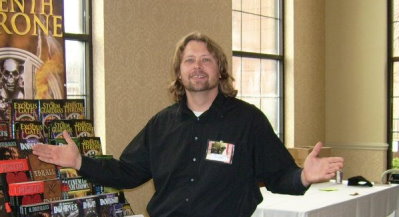