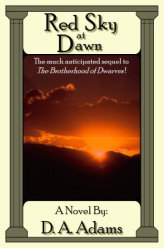 I’m thankful for Red Sky at Dawn.  That book was written under some of the most difficult conditions possible and turned out to be a pretty good book.  It was written one to two pages at a time each night between 2-4 AM after I had put in at least a twelve hour day at work.  Some nights, I had to pinch my thighs to stay awake long enough to hit my page goal, but I knew that if I didn’t at least get the rough draft finished before Finn was born, the odds of me ever finishing it would have been slim.  I learned a great deal about my threshold for pain and endurance with it.

I also found my voice with that manuscript.  The narrative moves swiftly, barely allowing readers time to catch their breath between intense scenes, and some of the intimate moments with the characters are very powerful.  The Battle for Hard Hope is one of the best fight scenes I’ve ever written, and the chapter arc where the captain saves Master Sondious is one of the best pieces of prose I’ve created.  I have noticed a few typos and minor errors in the manuscript, but I’ll chalk that up to the time-frame in which the book was edited.  When all five books are complete, I’ll polish out those mistakes for the next edition.  Personally, I feel like those minor flaws don’t take away from the book, but they do bug me.

Overall, I’m grateful for Red Sky.  It’s a strong work from the opening page to the final scene, and I am proud of if as a literary work.  I’m thankful that it will be one of the legacies I leave behind for my sons.